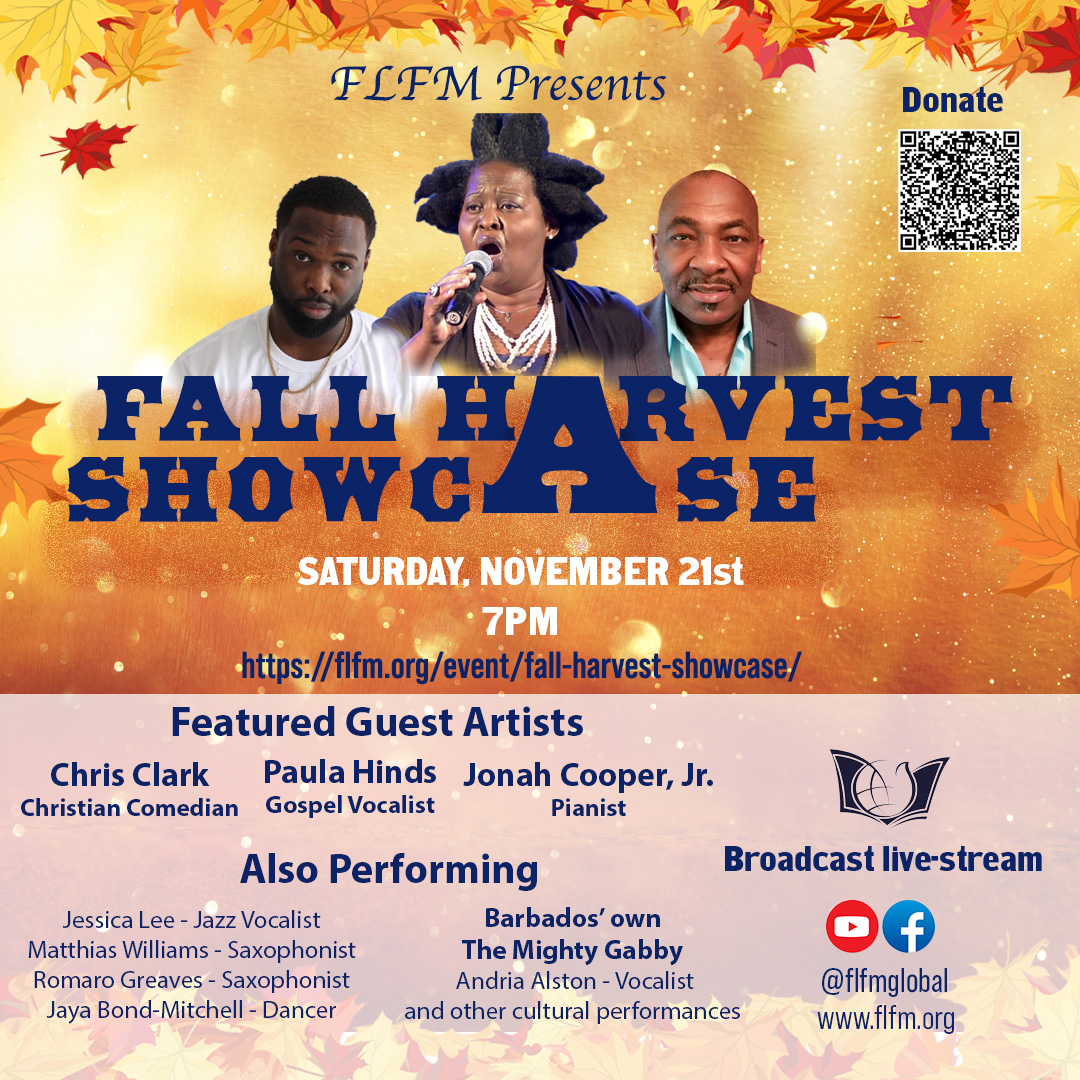 This is a 2 hour online event featuring professional and local performances, with cultural presentations dedicated to providing entertainment relief due to the impact of COVID-19 Pandemic. This is a fundraising event. However, there will not be a fee collected from viewers, but a donation of any amount is encouraged. Proceeds from this event will be utilized by the church for upcoming youth programs, outreach ministry, general maintenance, repairs, and as the Board deems necessary. FLFM is a nonprofit church that seeks innovative ways to share the Gospel, exemplify God’s love, and create opportunities for genuine and meaningful fellowship. 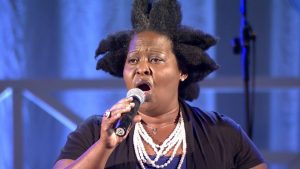 Since the age of three (3) Paula Hinds has been delivering the gospel in song, and has been the recipient of numerous awards both locally and internationally. She has had the opportunity to minister in the Caribbean, England, the United States of America, Africa, Canada, and Bermuda, where she had the privilege of performing before Presidents, Prime Ministers, Ambassadors, and locals alike. Paula has shared the stage both locally and internationally with such musical icons as Arturo Tappin, Dr. Bobby Jones, Yolanda Adams, Kirk Franklyn, Richard Smallwood, Rihanna, Aja and the list can go on. She thanks God for giving her the opportunity of taking the message of Christ to nations near and far.
Even before Paula sings a note, this renowned gospel artiste greets you with an effervescent smile that radiates the air and sends a clear message to all that she is doing something she totally loves. Her smiles, jokes, words of encouragement, kind deeds and humble deportment are testimonies of the God that she so eloquently sings about; and has endeared her to her audiences. With God as her center, Paula uses various rhythms/genres from jazz to contemporary to express her faith and total trust in Him.
This versatile lady of God, assists churches both locally and internationally with the development of their choirs, worship leaders and singer. From the concert halls filled with cheering fans, to the sombre chapels where she helps families say goodbye to loved ones in song, one thing defines Paula when she stands to sing regardless of the genre, it will be done with excellence, for she knows that God is worthy of our best.

Jaya Bond – Mitchell(Professional Dancer) She is originally from Cherry Hill, New Jersey, but trained in Philadelphia at the Eleone Unlimited Dance School under the direction of Shawn-Lamere Williams and she also trained in Pennsauken New Jersey at Halliday Dance under the direction of Frieda Halliday. In 2017 she received her B.F.A. in Dance at George Mason University where she graduated Cum Laude. After graduation she relocated to the DC area to pursue her dance career. She is currently in her second season with Dana Tai Soon Burgess Dance Company. Also she works with various projected based companies and was featured in many new works. She currently performs with Tariq Darrell + Unum Dance Collective, Agora Dance, Terre Dance collective and also Kymera Dance in NYC.–

Jessica Lee is a professional Jazz & Blues vocalist, pianist, songwriter, educator, producer and recording artist.  Jessica’s vocal recordings have been showcased on a variety of  international vocal-compilation albums with other pro singers, such as Norah Jones and Amy London, on the “When Blues Meets Jazz” CD, the “Greatest Audiophile Voices” CD series and more.  Ms. Lee performs at Jazz & Blues clubs, festivals, major charitable events, churches, universities, and theaters throughout the country, and has produced, recorded, and performed shows from Jazz Duo & Combo performances, to Big Band and Jazz-with-Symphony Orchestra performances.  Jessica also has a long history of singing and composing Inspirational repertoire that crosses musical genres.  She holds a J.D. from Duke University School of Law and has additional expertise in creative and social entrepreneurship and in strategic career, financial and legacy planning.  Jessica credits her older-generation mentors in both Jazz and entrepreneurship with playing a key role in her career success, and is therefore an advocate and supporter of various mentoring initiatives to assist career development and to pass on the beauty and power of the Jazz & American Music art forms.  Jessica has been teaching Voice (including Piano-for-Singers and Musicianship and Creative Career Development) for many years, drawing upon both her Classical and Jazz training and extensive performance experience.  Please see www.jessicaleejazz.com for more information.

With saxophone as the voice by which to express his many thoughts, ideas and emotions, Romaro Greaves has been continually making music his way of life through his spirited and skilled performances which leave audiences moved by his ever present passion for his craft. Romaro, thanks Almighty God for blessing him with the gift of music by which to inspire, entertain and touch the lives of others. He has already shared the stage with such prominent acts as NICHOLAS BRANCKER (Barbados), ARTURO TAPPIN (Barbados), FARMER NAPPY (Trinidad and Tobago), BRIAN BROMBERG (U.S.A), ATTA BOAFO (Africa), LT. STITCHIE (Jamaica), ALVIN SLAUGHTER (U.S.A) and LONDON COMMUNITY GOSPEL CHOIR (UK) .

Jonah Cooper, Jr. is the son and namesake of a Baptist Preacher. He is also one of eleven children and grew-up in Sharon Hill, Pennsylvania. Jonah has served as the Minister of Music for Second Baptist Church in Moorestown, NJ and Calvary Lutheran Church in Philadelphia. A self-taught musician, he has performed for over 40 years with a wide range of entertainers in both gospel and secular music across the country. He continues to perform at select events when he feels the call. Jonah is the Founder and President of Jonah Cooper Jr, LLC, an organization that provides Workforce, Entrepreneurship and Small Business Development throughout the nation.

Chris Clark shines as a talented actor, singer/songwriter, playwright, radio personality, as well as a stand-up comedian. Born and raised in Bridgeton, New Jersey, he has charmed audiences all across the country and throughout the world. Chris’ love for the stage began as an actor in several Gospel dramas and comedies, over a decade ago. His multiple role performances would draw the crowd and leave them in stitches. His transition from theatre to standup was about as natural as his gift to entertain. Chris’ phenomenal talents has allowed him to share the stages with The Clark Sisters, Hezekiah Walker, Kirk Franklin, just to name a few. He is a 4-time Award Winner for Gospel Comedian of the Year and most recently winning the 2017 Church Stars Best Comedy Web Series. He is also known as one of the Kings of Christian Comedy. Visit him at www.ChrisClarkComedy.com.

The Dr. Most Honourable Anthony “Gabby” Carter is a Barbados calypsonian singer, songwriter, guitarist, playwright, actor, and folk artist. In 2004, He was named the Cultural Ambassador of Barbados. The Mighty Gabby has been writing calypso for more than 40 years. Some of his music provided commentary and criticism of government decisions, giving a voice for the people. The Most Honourable Anthony “Gabby” Carter has received numerous awards, including Calypso King, Folk Singer of the Year, the 2005 Clement Payne National Hero Award and the 2006 Living Legend Award at the Barbados Music Awards. He was also honoured by the University of the West Indies with an Honourary Doctorate. In November 2019, he was honoured by the government of Barbados with the British version of the Knight of St Andrew, the equivalent of being knighted by the Queen of England. He is without question one of the most renown calypso and folk singers of Barbados

Matthias is a Caribbean musician and educator born on the island of St. Vincent but grew up and lives in Spice Island Grenada. Matthias studied Education at the University of the West Indies in Mona, Jamaica then was also schooled in Education and Music at the University of West Florida in Pensacola, Florida. He performs out of his homeland, Grenada, in both Gospel and Smooth Jazz genres. He is currently working on his debut Smooth Jazz EP hoping to launch it in a couple months. From Spice Island Grenada, here is Matthias Williams sharing the blessing and gift of music with you…

Born in Brooklyn, NY and influenced by her mother, Andria Smith-Alston began singing at age 6. Her style encompasses different genres such as R & B, Reggae, Jazz, and Gospel music. Andria has been blessed with a voice that encaptivates an audience and provokes worship. The passion exhibited in her songs is fueled by her love for the Lord and her deep commitment to reach the lost. Throughout her life Andria has been very active in the local church. Her roles included Praise and Worship Leader, Praise Dance Leader, Youth Choir Director, Drama Team Leader, Director and Coordinator of Black History Month Events and Programs, and Youth Leader. She has recently played the lead role in Ananiah Production’s Gospel Musical “Lord Just One More Chance” and also played key and supporting roles in KeKar Production’s “It’s My Divorce”; New York City High School Collaboration, “It’s Blooming”; and “Revelation” – Upper Room Christian World Center. Her journey has also led her to minister in bars across Long Island, where souls were lead to Christ. Andria has recorded with such artist as UVIP, (Five Time McDonald’s Gospel Fest Winners), Arise and The New York State Mass Choir, just to name a few. She has ministered throughout the United States and abroad.

Jeffrey Banks is a Staff Writer for the DC Theatre Scene Inc. He has performed Inspirational Spoken Word Poetry since 2003, spreading his message of encouragement, all over the country.

Faith and Life Fellowship Ministries praise dance ministry is called Anointed Messengers in Motion. Anointed Messengers in Motion members bless the lives of others and themselves through various genres of dance, flags and other praise instruments. They seek to minister to the Body of Christ, to the saved and unsaved, during special services and church events. Our mission is Isaiah 61:1 “The Spirit of the Lord GOD is upon me; because the LORD hath anointed me to preach good tidings unto the meek; He hath sent me to bind up the brokenhearted, to proclaim liberty to the captives, and the opening of the prison to them that are bound.”

Anointed Levite Mime Ministry was organized in February 2017. Its purpose is to uplift and encourage through the art of mime. This ministry signifies and encourages brotherhood among the young men in the group and around the church. The members strive to bring God’s word through movement and expressions to anyone with a burden and to those who are joyful and thankful. The message is that Christ is the answer and hope for our lives.